Today was not the second to last day of winter break for my kids day I had planned.

I had PLANNED on taking our kids down to my parents’ house (they live about an hour – on a good LA traffic day – south of us). We desperately need a change of scenery. My husband had pretty intense shoulder surgery on the 21st, right before Christmas, and he’s pretty limited on what he can do so we have been homebodies these last few weeks. But the boys wanted to see their Gaga and Papa and I wanted to see them too, so a day down South was planned.

So of course, nothing went according to plan. We have the world’s best work dog who we adopted when she was just shy of 4 months old and she will be 2 in February. She has been a joy and a challenge all at once. Friends have asked me to create an Instagram page devoted to just her antics. I’ve lost count of the number of shoes she has destroyed, stuffed animals she has murdered, papers she had shredded (I left my students’ papers out one day after grading them and she tore and ate 95% of them. I had to tell my students the dog literally – the most overused word but appropriate here – ate their homework). 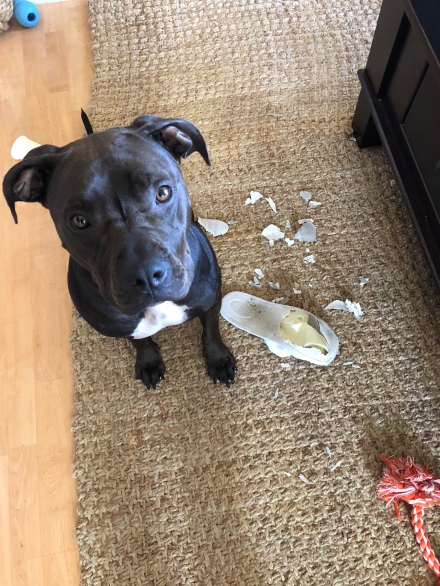 Anyway, she woke up vomiting and had this really large and bizarre blood red hot spot that she wouldn’t stop scratching. So of course we wondered what she ate and called the vet, who was able to buy a Polynesian Island because of the money we have spent on this little rascal (she ate a bee at 6 months old and required 2 emergency hospital visits just as a start). So trip to my parents’ place delayed by a few hours.

So, the vet determined she didn’t eat anything but likely was having another allergic reaction to who knows what (her breed is known for their sensitive skin) and gave her a shot to relieve the itching and IV fluids to replace what she lost vomiting.

So, I left with the dog, who was sporting a hump of fluid on her back, and a 3 day supply of prescription dog food.

On the way back from the vet, not one, not two, but 3 lights appear on my car, one indicating an emergency engine issue. Usually, despite knowing it’s not the best thing to do, I gamble with the service lights. Especially if it’s just the basic service due light. But, since I would have the boys with me and would be driving an hour on one of California’s busiest freeways, I opted to drop the dog and then take the car in immediately.

After another hour and a half, the car had been serviced, I was told nothing was wrong and the emergency light was a glitch and I was on my way. Now it was after 2 pm and the time when the freeway shifts. An hour drive could quickly turn to two plus if I wasn’t on the road right away.

Called my mom, scrapped the plan, went home and told the boys who were immediately and completely pissed off at me for ruining their day (because mine had been so, so fun thus far).

So I did laundry. And organized my kitchen. Took a few more Christmas decorations down. And then, around dinner time the dog started freaking out. Jumping on me and barking and acting like she needed to go out. So I’d take her out, nothing would happen, we’d come back and it would start all over.

And that’s when I noticed it. This sagging goiter like mass hanging from her belly. There was still fluid in her hump on her back, but a lot had dissipated and I wondered if the saline had traveled, even though that had never happened with our previous dog. So we called the vet, texted her pictures, and were told that it likely was the saline traveling, even though she’d never seen anything like this before (of course). She told us that it shouldn’t hurt but was likely causing the dog anxiety because she has this out of nowhere flapping goiter hanging from her belly. So now, I’m on goiter watch with a dog who is on a dose of Benadryl to not only help with the itching but to hopefully calm her the %**% down. 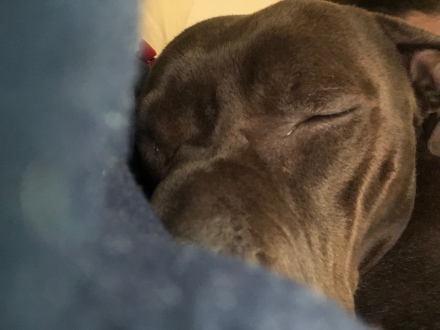 I haven’t showered, I think I might be wearing the same clothes I had on yesterday and I made my favorite dip so I could eat appetizers for dinner. Oh, and I ate vodka soaked gummy bears for dessert. Because they were there. 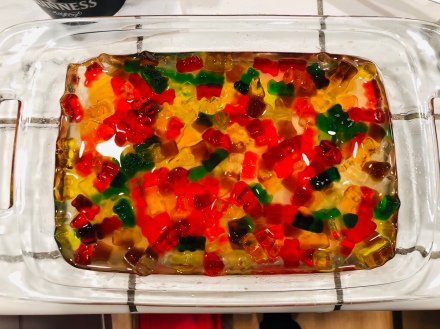 I made plans. Universe didn’t care.

That’s all I have. So welcome to the “I can’t believe I subscribed to Kate’s blog just to read such drivel and waste non refundable minutes of my life” portion of the program. I’m hoping the piece I intended to post today will be ready tomorrow.

(But I still took the time to write. And that’s the whole point for me. But I’m sorry this wasn’t the post I intended)

4 thoughts on “Page 4 – when the universe laughs”